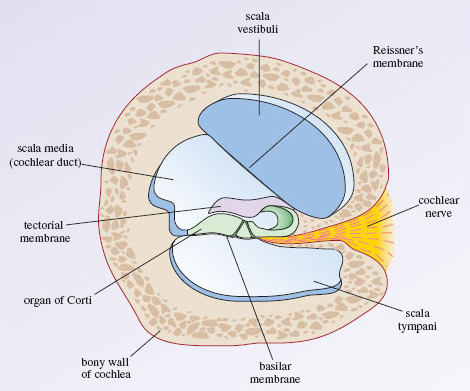 The cochlea is a hollow, spiral-shaped bone found in the inner ear that plays a key role in hearing and is involved in the process of auditory transduction. Sound waves are translated into electrical impulses that the brain can interpret as individual frequencies of sound. The spiral shape of the cochlea allows for different frequencies to stimulate specific areas along the spiral. This results in a tonotopic map that allows people to perceive various sound frequencies.

Specific areas along the Cochlear structures are stimulated by vibrations carried within a fluid known as endolymph found in the cochlear duct. The vibrations are then converted into electrical impulses in the cochlear duct through mechanical stimulation of hair cells within a special structure known as the organ of Corti. These nerve impulses are carried by the vestibulocochlear nerve from the cochlea to the brain for interpretation.

Understanding cochlear anatomy is essential to understanding its physiology. The cochlear tube is made up of three membranous and fluid-filled canals, which are the scala vestibuli (SV most superior and connected to the vestibule), the scala media (SM) and the scala tympani (ST most inferior and ends at the tympanic membrane secondary). and the round window) forming a structure of two and a half spirals.

Hair cells are specialized cells that play an important role in cochlear function. Hair cells are found within the organ of Corti and are divided into inner hair cells (IHC) and outer hair cells (OHC). IHCs are the true auditory receptor cells that synapse with bipolar spiral ganglion neurons to send afferent nerve impulses back to the brain via the cochlear nerve.

Actin filaments connect the stereocilia at the tips of the IHCs, and mechanically activated potassium channels open in response to vibration leading to afferent cochlear nerve signalling. Between 90 and 95% of the neurons in the spiral ganglia synapse at the IHCs. The remaining 5% to 10% of spiral ganglion neurons innervate OHCs. OHCs work to increase the maximum amplitude of the travelling wave of vibration. Efferent nerve fibres from the brain synapse with OHCs and decrease their ability to enhance the amplitude of the vibratory wave.

The inner ear develops embryologically from ectodermal cells at week 4 of gestation. The invagination of these cells forms the otic vesicle, which contains a dorsal and a ventral pouch. The dorsal bursa forms the endolymphatic duct and vestibular structures, while the ventral bursa elongates to become the cochlea.

The cochlea forms a spiral of two and a half turns at 10 weeks of gestation and reaches a maximum labyrinthine length at 18 weeks. The organ of Corti develops from the sensory neuroepithelium within the cochlear duct. SOX2 is an important transcription factor that plays a key role in cochlear development. Mutations in SOX2 have been shown to be associated with sensorineural hearing loss.

The cochlea is responsible for the auditory transduction phase that takes place in the inner ear. The tonotopic map created by the coiling of the cochlea allows people to interpret a large number of different sounds simultaneously through vibrations carried from the perilymph to the endolymph in the cochlear duct. The anatomy of the cochlea allows it to efficiently transport vibrations that are ultimately converted into electrical impulses and interpreted by the brain’s auditory cortex.

The auditory transduction process begins when sound waves enter the external auditory canal and strike the tympanic membrane, generating vibration. These vibrations are then transferred to the middle ear along the ossicular chain consisting of the malleus, incus, and stapes. The base of the stapes contacts the oval window with a piston-like motion that results in the transmission of vibrations to a fluid called perilymph within the cochlea. 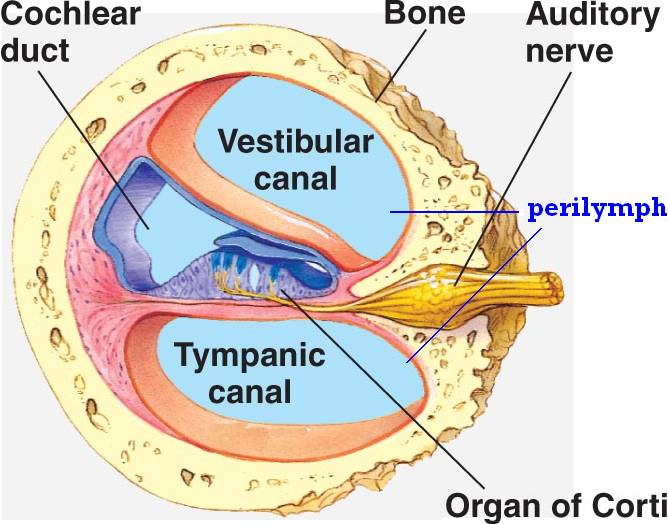 The basilar membrane contains a specialized structure known as the organ of Corti that plays a key role in auditory transduction. The difference in width and thickness of the basilar membrane between the base and the apex of the cochlea (BM narrow at the base and wide at the apex) allows the perception of sounds with a wide range of frequencies (20 to 20,000 Hz). Vibrations travelling through the perilymph in the scala vestibuli pass through Reissner’s membrane and into the endolymph of the cochlear duct, ultimately vibrating the organ of Corti.

The organ of Corti contains hair cells that respond to vibration by rubbing their stereocilia against a fixed structure called the tectorial membrane. The result of the hair cells bending against the tectorial membrane is depolarization of the attached nerve fibres. The frequency of vibration travelling through the perilymph will correspond to an area along the cochlea that is maximally stimulated. This allows the interpretation of various sound frequencies based on the tonotopic area along the cochlea (high frequencies at the base and low frequencies closer to the apex) that resonates most with vibration.

Sensorineural hearing loss involves damage to the specialized nervous system that makes up the inner ear and involves the cochlea or the nerves that exit the cochlea. The Weber test is done by striking the 512 Hz tuning fork and placing it in the centre of the head. The patient is then asked if the sound is lateralized to one or both ears. The sound will lateralize to the dysfunctional ear with conductive hearing loss and to the well-functioning ear with sensorineural hearing loss.

The next step is to perform the Rinne test by striking the 512 Hz tuning fork and placing it on the mastoid process of each ear. The patient is instructed to indicate when the sound is no longer heard, at which point the tuning fork is moved into the ear canal and instructed to repeat the process. The normal hearing function will have a 2 to 1 ratio of bone to air conduction times. If the hearing loss is conductive, bone conduction is heard for longer than or equal to air conduction. If the hearing loss is sensorineural, the air conduction is heard for longer than the bone conduction, but less than the normal ratio of 2 to 1.

Many etiologies of hearing loss occur through dysfunction of various parts of the auditory transduction pathway. Specific etiologies of cochlear dysfunction include noise damage and Meniere’s disease. Noise damage occurs during brief or sustained exposure to extremely loud noise. Exposure to sounds of 85 decibels or higher over a period of eight hours can cause permanent cochlear damage. The damage associated with exposure to loud noise destroys the hair cells in the cochlea.

The loss of hair cells leads to the inability to stimulate the afferent nerves and thus the inability to hear sounds of various frequencies. Meniere’s disease is caused by endolymphatic hydrops. This occurs when the volume of endolymphatic fluid within the cochlear duct increases, causing distention. The aetiology of Meniere’s disease involves dysregulation of aquaporin channels and osmotic imbalance involving endolymph production from perilymph through Reissner’s membrane and stria vascularis.