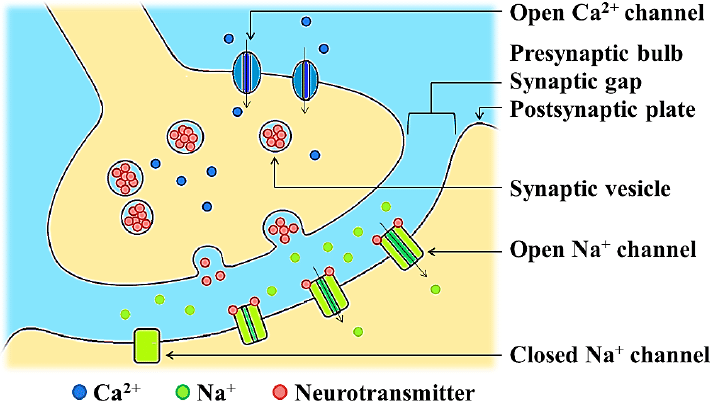 Chemical synapses are specialized junctions through which cells of the nervous system send signals to each other and to non-neuronal cells, such as muscles or glands. A chemical synapse between a motor neuron and a muscle cell is called a neuromuscular junction.

Chemical synapses allow neurons in the central nervous system to form interconnected neural circuits. Therefore, they are crucial for the biological calculations that underlie perception and thought. They also provide the means through which the nervous system connects with and controls the other systems of the body.

The human brain contains a large number of chemical synapses, and young children have about 1016 synapses (10,000 trillion). This number decreases with age and stabilizes in adulthood. Estimates for an adult range from 1015 to 5 × 1015 synapses (1000 to 5000 trillion).

In a prototypical chemical synapse, such as those found on dendritic spines, a mushroom-shaped bud projects from each of two cells, and the caps of these buds press against each other. At this interface, the membranes of the two cells flank each other across a narrow gap, the narrowness of which allows signalling molecules known as neurotransmitters to pass rapidly from cell to cell by diffusion. This gap, which is about 20 nm wide, is known as the synaptic cleft.

Such synapses are asymmetric both in structure and in the way they operate. Only the so-called presynaptic neuron secretes the neurotransmitter, which binds to receptors facing the synapse from the postsynaptic cell. The presynaptic nerve terminal (also called a synaptic knob or button) usually buds from the tip of an axon, while the postsynaptic destination surface usually appears on a dendrite, cell body, or another part of a cell. The parts of the synapses where the neurotransmitter is released are called active zones.

Neurotransmitter release is triggered by the arrival of a nerve impulse (or action potential) and occurs through an unusually rapid process of cellular secretion, also known as exocytosis: within the presynaptic nerve terminal, vesicles containing the neurotransmitter they sit “docked” and ready on the synaptic membrane. The incoming action potential results in an influx of calcium ions through voltage-gated calcium-selective ion channels.

The calcium ions then trigger a biochemical cascade that results in the vesicles fusing with the presynaptic membrane and releasing their contents into the synaptic cleft. Vesicle fusion is driven by the action of a set of proteins at the presynaptic terminal known as SNAREs. The membrane added by this fusion is later recovered by endocytosis and recycled to form fresh neurotransmitter-filled vesicles. Receptors on the opposite side of the synaptic gap bind neurotransmitter molecules and respond by opening nearby ion channels in the postsynaptic cell membrane, causing ions to move in or out and changing the local transmembrane potential of the cell.

The resulting voltage change is called the postsynaptic potential. In general, the result is excitatory, in the case of depolarizing currents, or inhibitory in the case of hyperpolarizing currents. Whether a synapse is excitatory or inhibitory depends on what type(s) of ion channel(s) conduct(s) the postsynaptic current(s), which in turn is a function of the type of receptors and neurotransmitters used in the synapse. synapse. 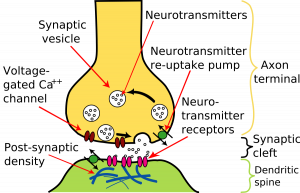 After fusion of synaptic vesicles and release of transmitter molecules into the synaptic cleft, the neurotransmitter is rapidly removed from the gap to be recycled by specialized membrane proteins in the presynaptic or postsynaptic membrane. This “reuptake” prevents “desensitization” of postsynaptic receptors and ensures that subsequent action potentials will elicit the same size postsynaptic potential (“PSP”). The need for reuptake and the phenomenon of desensitization in receptors and ion channels means that the strength of a synapse can, in effect, decrease as a train of action potentials arrives in rapid succession, a phenomenon that gives rise to called frequency synapse dependence.

The nervous system exploits this property for computational purposes and can tune its synapses through such means as phosphorylation of the proteins involved. Vesicle size, number, and replenishment rate are also subject to regulation, as are many other elements of synaptic transmission. For example, a class of drugs known as selective serotonin reuptake inhibitors, or SSRIs, affect certain synapses by inhibiting the reuptake of the neurotransmitter serotonin. In contrast, an important excitatory neurotransmitter, acetylcholine, is not reuptake but is instead removed from the synapse by the action of the enzyme acetylcholinesterase.

Generally, if an excitatory synapse is strong, an action potential in the presynaptic neuron will trigger another in the postsynaptic cell; while at a weak synapse, the excitatory postsynaptic potential (“EPSP”) will not reach the threshold for action potential initiation. In the brain, however, each neuron normally forms synapses with many others, and in the same way, each receives synaptic input from many others.

When action potentials fire simultaneously in multiple neurons that weakly synapse on a single cell, they can initiate an impulse in that cell even though the synapses are weak. This process is known as summation. On the other hand, a presynaptic neuron releasing an inhibitory neurotransmitter such as GABA can cause an inhibitory postsynaptic potential in the postsynaptic neuron, decreasing its excitability and thus decreasing the probability that the neuron will fire an action potential.

In this way, the output of one neuron may depend on the input of many others, each of which may have a different degree of influence, depending on the strength of its synapse with that neuron. John Carew Eccles performed some of the first important experiments on synaptic integration, for which he received the Nobel Prize in Physiology or Medicine in 1963. Complex input/output relationships form the basis of transistor-based calculations in computers and are believed to work in a similar way. in neural circuits.

The strength of a synapse is defined by the change in transmembrane potential resulting from the activation of postsynaptic neurotransmitter receptors. This voltage change is known as the postsynaptic potential and is the direct result of ionic currents flowing through postsynaptic receptor channels.

Changes in synaptic strength can be short-term and without permanent structural changes in the neurons themselves, lasting from seconds to minutes, or long-term (long-term potentiation or LTP), in which repeated or continuous synaptic activation can result in second messenger molecules that initiate protein synthesis in the nucleus of the neuron, resulting in alteration of the structure of the synapse itself. Learning and memory are thought to result from long-term changes in synaptic strength, through a mechanism known as synaptic plasticity.

An electrical synapse is a mechanical and electrically conductive link between two contiguous neurons that forms in a narrow space between the presynaptic and postsynaptic cells known as a gap junction. At gap junctions, cells come within about 3.5 nm of each other (Kandel et al., 2000, p. 179), a much shorter distance than the 20–40 nm distance that separates cells at synapses chemicals (Hormuzdi et al., 2004). ).